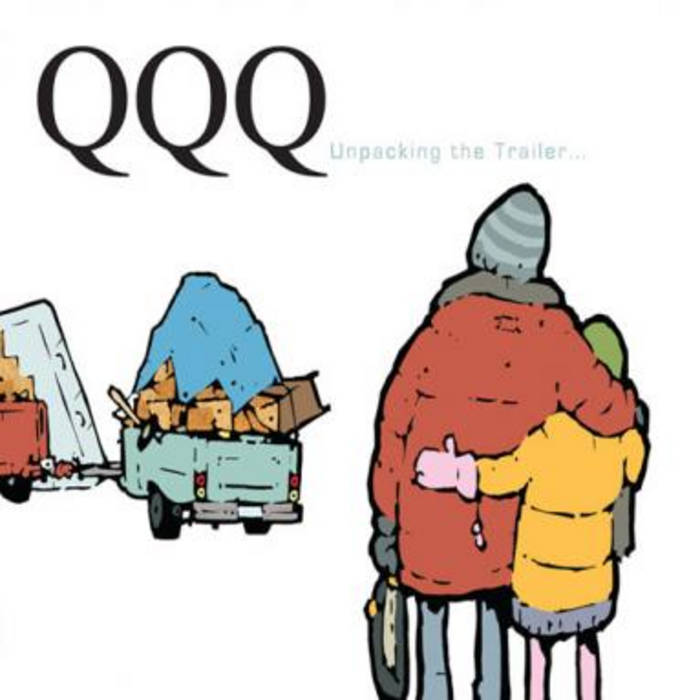 QQQ is comprised of two married couples — members of three separate New Amsterdam ensembles. Dan Trueman plays the Hardanger fiddle, a folk instrument with a set of five sympathetic steel strings that lend it a bright, ringing timbre. He is joined by his wife Monica Mugan on classical guitar (who along with Trueman forms the group Trollstilt), driving the tunes forward with fingerpicked patterns. The viola of Beth Meyers, from janus, merges with Trueman’s fiddle to add dark, lustrous counterpoint to the bowed string textures. Her husband, Jason Treuting of So Percussion, rounds out the quartet with imaginative, propulsive work at the drumkit. With its core of four experienced and individually acclaimed musicians, the ensemble has been described by music critic Hank Schteamer as “literally brimming with fresh ideas.”

The thirteen tracks on Unpacking the Trailer are based on tunes written by Trueman or Treuting and refined by the group collectively, without notation. It was a cassette recording of traditional Norwegian dances and wedding marches that inspired Trueman to take up the Hardanger fiddle, and the album’s sound is infused with an energy and jubilant spirit to effectively “combine chamber music intricacy with folksy twang” (TONY). The songs are by turns joyful, wistful, playful, and melancholy; tuneful, but filled with offbeat details that repay repeated hearings with increasing pleasure. One might call the group’s music Americana, if Oslo and Brooklyn were located in the Appalachians.

Unpacking the Trailer was the subject of much positive criticism, hailed in a four star review as “a bold statement of purpose disguised as an unpretentious lark” (Time Out New York), “reserved and contemplative” (Grey Flannel Suit) with “love pouring out of every note” (The Silent Ballet). The track “Spring” was selected as a “Pick of the Week” in USA Today where was called “beguiling.”

Bandcamp Daily  your guide to the world of Bandcamp